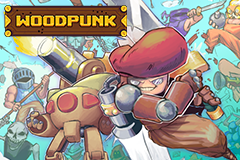 Today, Libredia and developer Meteorbyte Studios announce the release date of the brand new Woodpunk on PC for November 22nd, 2018.
Woodpunk is a fast-paced roguelike retro shooter, set in an alternate Medieval Era with futuristic inventions and warfare. Players take over the role of Aquinas, a genius inventor. His weapons are randomly assembled from independent modules, allowing for wild combinations like ice-shotguns, wooden chainsaws or bomb-firing machineguns – over 1400 unique weapons are possible with this system, helping greatly in fighting of the hordes of enemies swarming the screen, as well as the gigantic bosses.
As with the weapons, Woodpunk’s levels are created dynamically and everything on screen, from buildings and walls to carts, boxes or any other object, can be destroyed. Gameplay is happening in real time and features a mixture of harsh, relentless action, requiring strong reflexes and a fair amount of battle strategy.

TWO PLAYER LOCAL CO-OP
Players don’t need to face the challenges alone however, as Aquinas has built a faithful wooden robot companion, Theo, to help him out in the feast of mayhem, explosions and chaos that is Woodpunk. The AI-controlled Theo can be taken over by a second player to support Aquinas on his challenging quest with various skills, including creating new weapons, going into turret-mode or transforming into a wall to protect against enemies.

Woodpunk is the first game of Spanish development team Meteorbyte Studios. Following the game’s PC release, both the Xbox One and PS4 versions of the game are scheduled for Q1 of 2019.