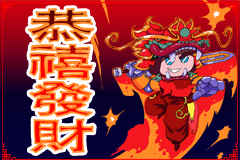 Today, we’re happy to release Patch 1.20 for our roguelike retro shooter WOODPUNK on PC, and It comes with a series of new features.

This new update is on celebrating the Chinese New Year on February 5th. To celebrate the year of the pig, we’ve prepared a new special event that will happen once a year. The villagers have been working hard on their towns to celebrate the Chinese New Year. The villages are now full of blossomed Cherry trees and decorative lamp posts and lanterns. The entrances to the villages have also been changed to resemble Chinese gates. In addition to the visual changes, the game now also features a Dragonpunk suit for the hero to wear, giving him special powers.

In addition to the new theme, the game also receives a series of gameplay enhancements, the most important being a fully revamped weapons creation system following requests from the game’s community.
While previously the game would supply the players with new, procedurally generated weapon combinations after each single stage, the new system will allow players to keep their weapon when transitioning to the next stage. This comes at a cost however: To keep the game’s balance while incorporating this feature, Woodpunk now introduces a system where weapons will degrade over time, requiring the player to either repair them or have their trusty robot companion Theo create a completely new weapon.

The new system maintains the game’s standout feature of allowing for hundreds of different weapon combinations during play, while giving players the option to focus on individually preferred weapon choices. To cater to this new mechanic, the game also introduces another powerful suit, the Tinkerpunk.
In addition to all of the above, there is of course also a variety of new tweaks, features and fixes in the game. The full changelog can be found on STEAM .