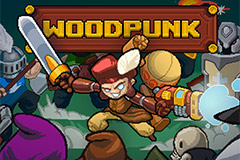 Libredia is expanding its business. The company, founded by industry veteran Stefan Layer in 2008, is starting to venture into publishing its own projects and expanding its team.
The company’s goal is to bring new titles produced and financed by Libredia into international markets, by taking advantage of the vast network of distribution partners that Libredia established during the past ten years.

The first fully self-produced games are already planned for 2018, including the roguelike retro shooter Woodpunk from Spanish developer Meteorbyte Studios.

Libredia’s publishing activities are not restricted to new IP however, the company also takes over the publishing of selected titles from its existing portfolio. This includes the over-the-top fighting game GUTS, which is currently being reworked and enhanced with features for future console releases. The same is true for the acclaimed indie adventure Bohemian Killing.
These planned releases only mark the start for Libredia in building up a high-quality publishing portfolio, which is planned to comprise half a dozen titles by the end of the current year.