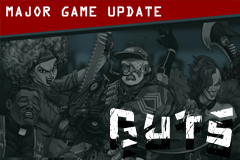 Today, Libredia and developer Flux Game Studios released a massive update to their over-the-top fighting game on PC, while at the same time announcing the console versions of the title. The update contains significant modifications to GUTS’ graphics and controls.

The new update for GUTS brings a multitude of improvements to the game that will not only enhance gameplay but also make the game more accessible for new players entering battle. Apart from enhanced graphics, the game receives a complete overhaul of the fighting system to allow for faster and more fluid action.

The main changes to the game are:
• Full rework of the move system, with rebalancing and streamlined controller input
• After losing a limb, the remaining body parts now allow for more powerful combos and moves, giving the player a chance for a big comeback
• All GUTS moves have been optimized and can be executed quicker and more fluidly, also every character now features two GUTS moves
• Players can now specifically select the limbs to target with their GUTS moves
• New blocking system; the blocks are easier to pull off and now feature an energy bar, that, if depleted, can lead to dizziness of the character
• New lighting, many new graphic effects, higher framerates and a more streamlined gameplay experience with optimized integration of bullet time lead to a more fluid gaming experience

These game improvements all come in light of Libredia and Flux Game Studios announcing the console versions of the game, that are currently in development. GUTS will be released for PlayStation 4 and Xbox One in Autumn 2018.