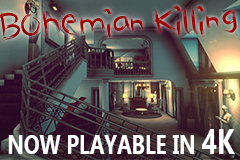 Bohemian Killing has received a graphic overhaul to allow modern gaming setups to run the game in full 4k resolution.

The winner of the “Best Story” Award at the Pixel Awards 2016 has received new 4k textures, an overhaul of the game’s lighting and a series of new graphics- and image effects.

The narrative-driven courtroom drama set in a 19th century steampunk Paris is the first game of its kind created by a real-life lawyer.